I'm feeling rather under the weather at the moment, the combination of a drop in temperature and my weak tonsils saw me succumb to tonsillitis over the weekend. But being a seasoned veteran of such attacks I've just about seen it off without having to go to the doctors, so fingers crossed it clears up soon.

Before that though I'd completed a couple of illustration commissions including this one on behalf of The Design Mill for the TUC's Congress Guide 2010: 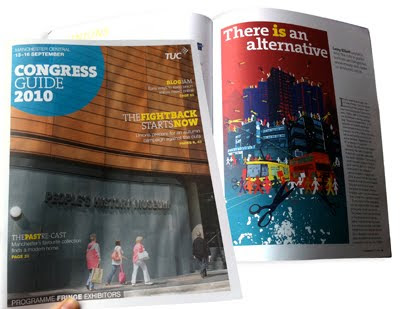 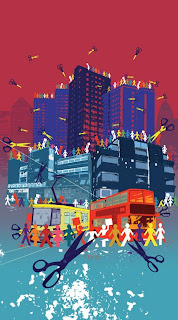 This was a really nice commission and I was pleased with the energy in the outcome. I was asked to show 'people fighting the threatened swarm of [Government spending] cuts' in several situations and this automatically suggested a swarm of bees or flying ants or locusts, something buzzing around threateningly, so I decided to recreate this with scissors.
It's a little more literal than I am normally, but I could see the image so clearly as soon as I got the brief that I decided not to fight against it and instead concentrate on making the image energetic and dynamic.

I originally intended to use real figures, but I couldn't really have the scissors hacking at the figures then. So I went with a paper chain of people, the intent behind this was to show the faceless (to the Government at least) masses of people affected by the proposed cuts. By joining them together I was trying to represent the rallying groups and bodies like the TUC who are fighting against the proposed cuts.

I think this is a pretty straightforward image (note the scissors are blue and yellow to represent the coalition Government), but it's one of my recent favourites, mainly because the colours and all of the elements hang together really nicely.

I've also done an illustration for Learning Disability Practice, but I'm not sure that has been published yet, so I'll pop it online when it is 'live'.